The Healing Power of Manuka Honey

For thousands of years, all over the world, honey has been prescribed for it’s antibacterial properties. The ancient Egyptians used it to treat sores and soldier’s in the trenches, during World War One, applied it to their wounds. However, with the popularity of antibiotics, honey took a back seat and was dismissed as a home remedy. That was until the scientific community discovered Manuka honey. A special type of honey found only in New Zealand and made from the flowers of the manuka bush (Leptospermum scoparium). Manuka Honey has been shown to have strong anti-bacterial, anti-fungal and anti-inflammatory properties that make it more effective than antibiotics, especially when it comes to treating bacteria that have become antibiotic resistant. All honey contains hydrogen peroxide which is why it is a natural antibiotic, but Manuka honey also contains a unique chemical compound, methylglyoxa, which gives it extra bug fighting powers. 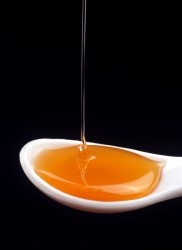 Now doctors in the UK and New Zealand are using Manuka honey, in hospitals, to dress post-operative wounds. In fact a study published in the European Journal Of Medical Research in 2003 claimed manuka honey used to dress post-operative wounds had an 85 per cent success rate in clearing up infections, compared with 50 per cent for normal antibiotic creams. I had never heard of Manuka honey until my father, who was traveling in New Zealand, was given some for a skin infection and was impressed with the results. I then discovered that there had been promising clinical research into using Manuka honey both externally on infected skin and internally, to treat stomach ulcers, indigestion, heartburn and diarrhea.

When buying Manuka honey, it’s important to bear in mind that the level of anti-bacterial activity is classified by the UMF, or Unique Manuka Factor. Ranging from a UMF of 5 to one of 30, the higher the UMF rating the more powerful the therapeutic effect. So for example you could buy this Manuka honey, Bio Active 20+ Manuka Honey,if you wanted to address a specific complaint and this one, Raw Organic Organic Manuka Honey Active 12, which is a bit cheaper if you just wanted to add something healthy to your diet.

Stress and infertility: What message are you giving your body?