A few weeks ago I posted a recipe for Summer Borscht which prompted one of my Facebook friends to ask for more beet recipes. I’m happy to oblige because I love beets mostly for their sweet taste but also because they contain powerful nutrients that help to fight against anemia, heart disease, liver disorders, gallbladder problems, and certain types of cancers, especially gastrointestinal cancers.

I often advise patients who suffer from gallbladder pain to eat beets because they thin the bile and so can relieve pain. For this reason, they are also one of my favorite ways to benefit the liver and the betaine they contain has also been shown to improve the function of liver cells. I recommend beets to pregnant patients because not only are they a great blood tonic but they are full of folic acid which can help to prevent certain kinds of birth defects. When it comes to heart disease there is evidence that beets can lower cholesterol and reduce inflammation and there are several studies that look at how beets can combat cancer. You can read them here, here and here.

Today I made used some home-grown beets in a salad which, combined with some Seedy Soda Bread made a lovely, light healthy lunch. 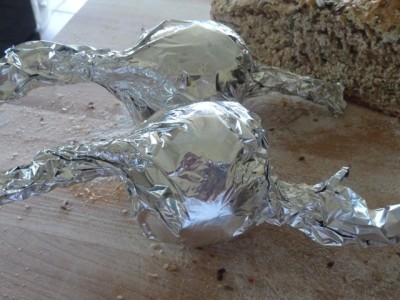 Take two beets and clean them but don’t take the skin off or chop them in anyway. This is because they are more nutritious if the juices don’t leach out during cooking. Wrap the beets in foil and bake in a medium oven for 45 – 60 minutes. You can do this any time the oven is on too cook something else. Neither temperature nor the timings need to be exact. These were roasted at 375F for 50 minutes. 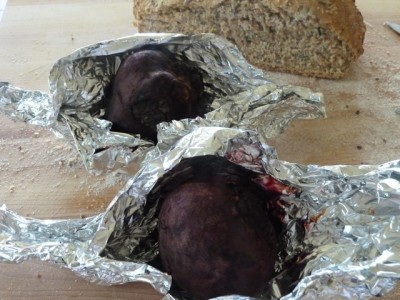 Unwrap and allow to cool until they are warm but cool enough to handle. 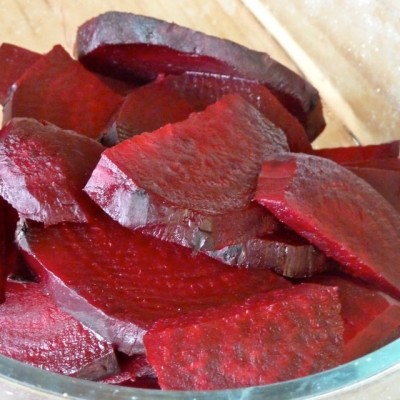 In a small bowl mix together the olive oil, vinegar and agave nectar to form a marinade. Chop the beets and mix them in the marinade and leave them in the fridge for at least an hour. The beets can be stored like this for up to 24 hours. When ready to eat take the beets from the marinade and arrange on a plate with the chopped cucumber. Sprinkle the mint and dill over the beets and cucumbers. In a small jug mix the yogurt with some of the marinade to taste. This gives the dressing a rather alarming pink color but preserves as much of the beet nutrients as possible. Pour the dressing over the salad and garnish with chopped chives. 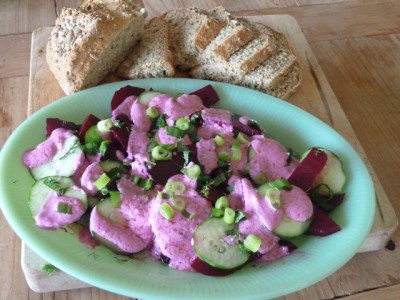 Serves 2 -3 and tastes great with the Seedy Soda Bread especially if you used caraway seeds in the bread recipe.