Warming Up with Pozole Stew

It is a very chilly evening and the mercury is expected to keep dropping. With this in mind, I thought we’d head south for dinner and that I’d try my hand at making Pozole, a hearty soup from Mexico.

Pozole is an ancient stew that dates back to pre-Columbian Mexico.  Traditionally, it is made with pork.

The thing that makes this soup different from others, however, is Hominy – yes, as in grits. This is corn that has been treated to remove its hull or germ. In addition to practical reasons for doing this, namely that it prevents the corn from sprouting while in storage, this process gives the corn a firm chewy texture that can hold its own in a long-simmering stew. It also enhances the corn’s nutritional value, making niacin and other vitamins more readily available.

Another distinctive element of this stew is the seasoning – specifically, layers of different peppers for heat. In our family, we often go for incendiary spiciness and in pozole, it balances well with the classic, cooler garnishes. But if the heat has no depth, it just hurts, so I used 5 different kinds of pepper, added at different points, to make this robust soup hum. Here is the recipe to feed four hungry people.

Get the good smells going…

One of the fun parts of pozole is the Garnish. We used avocado. cilantro, radish, and lime but you can use any or all of the above.

A note on spicing up your pozole. If you don’t want your stew too hot, cut the peppers down by half and you should still get the warmth and flavor but a bit more gentle. The tepin peppers in this recipe are optional. If you use them, the flavor is fantastic, but they are super hot so be cautious. Handling peppers is tricky enough – you don’t want to ruin your meal by using too much. 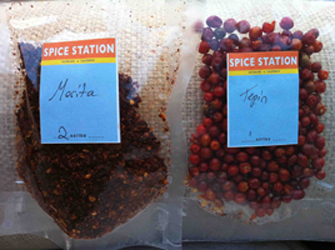 One of the golden rules in cooking is that the quality of your ingredients makes all the difference. This holds true for spices as well. When I was in Los Angeles last month, my brother turned me onto the Spice Station. They have virtually every spice under the sun and they’ll even make a custom blend for you. If you want to learn about and experiment with new peppers – or any other kind of spice, they have a website & online store that you must check out.