I’ve been hearing from my patients about a vicious bout of viral gastroenteritis going around. Some people have thought they had food poisoning and one patient even rang to see if their herbs could be causing violent diarrhea and vomiting; I was able to assure them they weren’t.

Last week it was my turn. My husband and I were struck by the virus after catching it in a restaurant. We ate different things so it wasn’t food poisoning but evidently someone who was sick (and a poor hand-washer) touched our food. For two days we ate nothing. We just sipped water and waited for it to be over.

When I started to contemplate food again I looked around my kitchen for something that was nourishing but easy to digest. Then I had a brain wave. Rice Congee also known as Jook. My teachers at Chinese Medical School had taught me to make this for patients who were convalescing. It’s a kind of slow cooked rice porridge that is a common breakfast food in China and is also often given to old people, small children and people recovering from an illness. I made a big pot and it made me feel so much better that I thought I’d share the recipe with you here. There are many variations on congee throughout Asia so this is only one of many recipes. If you develop a congee passion you may want to buy The Book of Jook: Chinese Medicinal Porridges–A Healthy Alternative to the Typical Western Breakfast by Bob Flaws, which is full of great information. 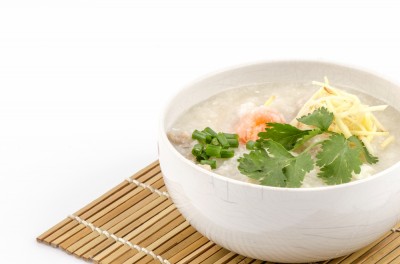 Anyway here’s how I made my congee. I felt way too weak to go to the supermarket so I just used what we had in the house, making my congee not necessarily authentic but delicious and very healing just the same.

3/4 cup of rice (you’re supposed to use short grain but I used some jasmine rice we had in the cupboard and it was fine)
4 cups water
4 cups chicken stock
1 tbsp low sodium tamari
3 slices of ginger
Below are Chinese herbs I added to my congee. Feel free to omit them. Your congee will still be nourishing and delicious.
Dang shen – Codonopsis
Huang Qi – Astragalus
Da zao – Chinese dates

To complete the porridge

Wash the rice well and put it in a large pot. Add the water, chicken stock, tamari and ginger slices and bring to the boil. At this point I also added some Chinese herbs. We’re a household with two Chinese herbalists in it so we have things like that lying around. Obviously you probably don’t so don’t worry about missing this step. Cover the pot leaving the lid partially open. Lower the heat and cook for 1 hour, stirring occasionally to prevent the rice from sticking to the bottom of the pan.

Meanwhile chop the chicken thighs into bite size pieces. Combine the marinade ingredients and marinate the chicken for at least 15 minutes. After the congee has been cooking for one hour it should be thick and have the consistency of porridge. Take the ginger slices and the Chinese herbs (if you are using them) out and throw them away – they have imparted their goodness. Add the chicken and the marinade and cook for a further 15 minutes.

At the end sprinkle the green onions on top and enjoy.

This proved just the thing for a tender digestive system but would also be great post-partum or any time you need building up.

All our practitioners are trained in Eastern nutrition so feel free to ask any of our team members for dietary suggestions.

Everything You Need to Know About Breastfeeding