Olive Oil, Tomatoes, and Leafy Greens: Why the Greek Diet is so Healthy

I love Greece: I love the people, I love the beautiful islands, and most of all – I love the food. Noah and I were lucky enough to be able to visit Greece for a holiday and recently returned from a happy week in the Ionian where we ate heartily, reveling in the beautiful, fresh produce, prepared simply with lots of heart-healthy olive oil. We saw first-hand why the Greek diet is considered to be one of the healthiest in the world. In fact, a 2003 study conducted jointly by researchers at the University of Athens and Harvard University found that people who consumed a traditional Greek diet experienced a 33 percent lower risk of death from heart disease and a 24 percent lower risk of death from cancer. 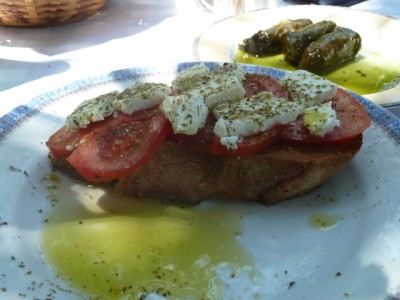 In our book Making Babies: A Proven 3-Month Program for Maximum Fertility

Dr. David and I suggested that people trying to conceive should eat a broad range of fruits and vegetables, healthy fats, some lean protein, and whole grains. This in essence is the Mediterranean diet and adopting some of its tenets is a great idea for everyone.

At the core of the Greek diet are dark leafy greens which are often not cultivated but foraged for in the forests and hedgerows. Rich in lutein which can prevent clogged arteries, dark green vegetables are also a great source of folic acid. 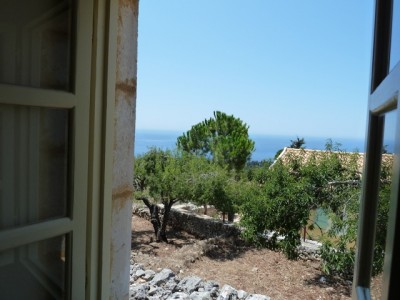 As many of you know I often suggest to patients that they increase their consumption of kale, beet greens, chard, collards, spinach, and dandelion greens.  This is because in Chinese medicine they are a blood tonic and also move qi which means that they are great for people with minor hormone imbalances and PMS. Many of you ask me for recipes and I usually suggest simply steaming the greens and adding a touch of lemon juice. Yesterday, however, inspired by my Greek vacation and a wonderful pie I ate, I baked a pie with an olive oil crust that was packed with greens. I’d never made an olive oil crust before. My British roots mean that I usually use butter which gives a super tender pastry but ups the saturated fat content considerably. The pie crust I made with olive oil came out great though. It was a little bit tougher than a butter crust but made up for that by being crispy and having a pleasing nutty flavor.

Served with a tomato salad it was a great example of healthy Greek food. Rich in antioxidants and iron, low in saturated fat, high in monounsaturated fat, and full of fiber, it also tasted delicious so I wanted to share the recipe with you here.

For the Olive Oil Pastry

For the Pie Filling 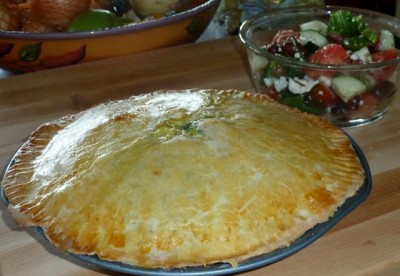 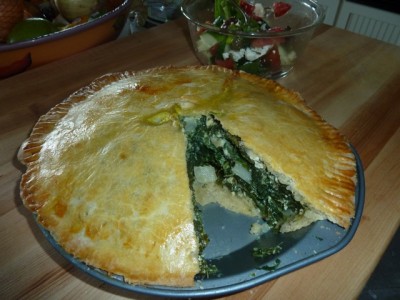 What Your Cravings Are Telling You (+ Some Tips For Healthier Alternatives!)

Cool as a Cucumber on a Hot Day