Splenda – Not So Splendid! 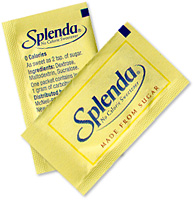 Splenda®, it is claimed, is the perfect alternative to sugar – sweet but with no calories, no insulin spike and according to the manufacturers no side effects. However recent research suggests that Splenda® is not as safe as we thought. In fact it seems to be the latest in a long line of artificial sweeteners that are touted as safe initially and then found to have serious side effects in the long term.

Splenda® is the trade name for sucralose, an ingredient discovered in 1976 by British scientists seeking a new pesticide formula.  It is advertised as natural because it is made from sugar and while it is true that the Splenda® molecule is comprised of sucrose (sugar) there is one big difference, three of the hydroxyl groups in the molecule have been replaced by three chlorine atoms. Once Splenda® gets to the gut, the sucralose goes largely unrecognized in the body as food and that’s why it has no calories but it also means that it remains in the intestines where it effects intestinal flora.

Interestingly Splenda® may not even do what it’s supposed to do, which is help us lose weight. In fact a respected team from Duke University found that using Splenda® may lead to weight gain. Their research which was published in The Journal of Toxicology and Environmental Health,(Part A January 2008) showed that Splenda® can cause weight gain because it reduces the amount of good bacteria in the intestines by 50% and increases the pH level in the intestines which allows pathogenic bacteria to proliferate. The study followed rats who were given Splenda® regularly which resulted in significant weight gain independent of diet. The research also found that even 12 weeks after the rats stopped taking Splenda, they continued to gain weight compared to a control group. They attributed this to the fact that Splenda® remains undigested in the gut for long periods of time.

I believe that any sugar substitute that your body does not recognize as food does not give you the nourishment you need causing your body to crave more and more of the sweet taste and leading to over eating. Combine this with the effect of unabsorbed Splenda® on the PH and flora of the intestines and the advice seems clear – Eat small amounts of natural sugars from plants where appropriate and give the artificial “frankensugars” a miss.

Can probiotics help you get lean?