It isn’t news to anyone that it is super hot out there. This summer has been more forgiving than last year, but there have still been a fair amount of sweateringly hot days. We wanted to give you some advice on how to hydrate and cool down, naturally! I went around the office and got some tips from the practitioners, and I am going to share the wisdom with you all! 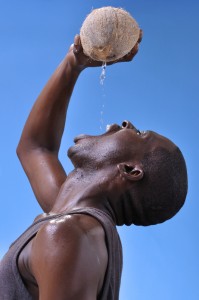 Coconut water is low in calories, rich in potassium, and fat and cholesterol free. It can be an acquired taste for some but so as long as you enjoy the taste, coconut water may potentially be better at keeping you hydrated than a sports drink or water.

Recent studies demonstrated that coconut water replaced body fluids as good as a typical sports drink, and slightly better than water! However, be careful not to entirely replace water with coconut water, because it can get pricey and those calories can add up.

Next up, we have a summer favorite: Watermelon!

Watermelon is very cooling and hydrating, plus it has natural electrolytes. The fruit is 92% water, 8% sugar and contains essential rehydration salts calcium, magnesium, potassium and sodium. Watermelon is also rich in Vitamin C , as well as beta carotene and lycopene which will give the body protection from UV light.

In Chinese medicine, we use the rind as well as the fruit. It is associated with the spleen and stomach meridians. All parts of the watermelon, including the fruit, rind and seeds, are used in traditional Chinese medicine. The ground seeds are often incorporated with other herbs as a type of diuretic, and may also help clear up urinary tract infections. Another active ingredient in watermelon, curcubocitrin, may help to reduce blood pressure.

What was surprising to me was that not everything we ingest should be cool in order to keep you cool. My first thought would be, “I am sweating and would rather an iced tea over a hot one!” However, in some cases you would also be surprised as I was to learn that is not the best thing to do.

The increased rate of perspiration is the key. Although sweat may seem like a nuisance, the body perspires for a very good reason. When sweat evaporates from the skin, energy is absorbed into the air as part of the reaction, thereby cooling the body. A larger amount of sweat means more cooling, which more than counteracts the small amount of heat contained in a hot beverage relative to the entire body.

Of course, the sweat has to evaporate in order for you to feel cooler, so if you are wearing heavy clothing or live in a very humid climate, drinking a hot beverage won’t help much. But on a hot, dry day when you’re wearing shorts and a t-shirt, hot coffee might actually cool you off more than a glass of cold iced coffee.

In Traditional Chinese Medicine (TCM) there is a view that foods hold hot or cold properties. In order to keep your body in balance, you must give your body what it needs! The concept is used in traditional Chinese medicine to refer to to the “energies” of foods and beverages, and is derived from the Yin/Yang concept in Taoism, hot being Yang, the masculine/aggressive force, and cold being Yin, the feminine/passive force. Any food can be roughly classified into hot, cold, and neutral categories.

In TCM, it is believed that cold foods slow your digestion down, and in fact eating something warm can help to keep your body temperature at a moderate level. Broth based soups can really help to cool you down, despite being counterintuitive. We recommend a mung bean soup, because not only can the broth cool and hydrate you, but the mung beans have strong cooling properties as well! Who knew? Here’s a recipe for it from The Dr. Oz Show.

The Healing Power of Oregano

Give alternatives to the Flu Shot