Unbinding the Heart: A book recommendation by YinOva

“How would your life be if you lived with a heart fully open and free and you knew that your story mattered? Think about this for a moment as you come and sit down with me. Imagine we’re sitting under an olive tree on a midsummer afternoon, sharing a Greek picnic of olives, feta cheese, fresh garden tomatoes, home-baked bread, a wonderful chilled Greek wine, some watermelon and some grapes, and sharing the joy of simply being alive. While the breeze wafts away our worries, I offer you my stories, from my open heart to yours.”
-From Unbinding the Heart: A Dose of Greek Wisdom, Generosity, and Unconditional Love 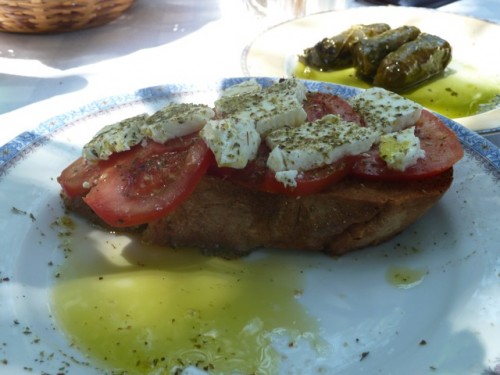 Agapi Stassinopoulos and I were introduced by a mutual friend who thought I would like her latest book, Unbinding the Heart: A Dose of Greek Wisdom, Generosity, and Unconditional Love

. Agapi was kind enough to send me an advanced copy of the book and my friend was right, I loved it. What’s more, as I got to know Agapi, I began to realize that her life’s journey has led to her “unbinding” her own heart, making her one of the most delightful, warm and wise women.

The book begins in Greece where Agapi shared a childhood with her sister, Ariana, in a family that had been profoundly impacted by the Nazi invasion during World War 2. Agapi’s father had been imprisoned in a concentration camp, as a punishment for publishing an underground newspaper, and her mother, Elli, had risked her life working for the Red Cross. Elli was, by all accounts, a remarkable mother and the wisdom she passed on to her daughters runs like a brightly colored ribbon through the book weaving Agapi’s stories together. Elli’s determination for her daughters led Ariana to study at Cambridge and then to a career as a writer and political commentator. She is now the president and editor-in-chief of the Huffington Post. Agapi, meanwhile, studied at RADA and became an actress, producer and writer. She has published three books and is now a motivational speaker and a regular contributor to her sister’s website.

As Agapi’s stories unfold she takes the reader with her as she gently explores the lessons she’s learned. She describes her disappointment as her acting career failed to live up to its early promise and how she used these feelings to find her path. She tells of being double-crossed when producing her first movie and how the pain of betrayal made her feel quite stuck, telling her story over and over again, until her mother simply says, “turn the channel, dear” and she realizes that moving forward, after being hurt, is a choice. 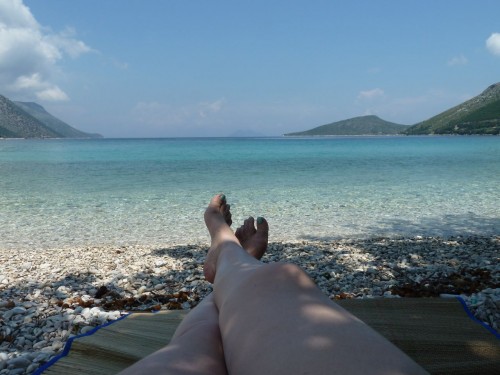 follows Agapi’s life as she moves from Greece to England and then both coasts of the USA but it is no accident that the book ends, like Odysseus’s journey, back in Greece on the island of Ithaca. Ithaca is a magical place that is very close to my own heart. The picture of Greek food at the top of this page and the pictures below of toes on a rocky beach and a view from a window are mine, taken in Ithaca during a particularly trying time in my own life when I too was coming to terms with betrayal. I wish I’d read Agapi’s wonderful life-affirming book then, because if I had I may have learned to “turn the channel” sooner. Agapi was kind enough to answer some questions for our Yinova community.

Your mother Elli plays an important role in this book and the reader learns a lot from the wisdom she passed on to you. I was struck by how she was ambitious for you and your sister, Ariana, and willing to take extraordinary steps to help you both succeed but that her ambition did not stray into controlling your paths. Instead she validated each of you as individuals. As a mother myself, I’m interested in how she gave you both wings so can you talk a little about how she encouraged your individuality and helped you both fulfill your destinies? 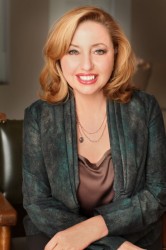 Agapi: My mother was masterful at seeing the unique gifts that her daughters had and not comparing us to each other, but reinforcing our strengths and seeing what each child had to express.  It was obvious.  I was more artistic, loved to dance and loved theater.  Arianna loved math and economics and excelled in those fields.  Instead of trying to push me to be good at something I had no interest at, she gave me opportunities to express and opened doors for us to enhance our gift, develop it and find ways to express what we were good at.  She didn’t do this only with us, but with many people she came in contact with and helped give people permission to go for what they were good at and permission to forget struggling for what they were not good at.

Jill: What a wonderful gift she gave you! Also from a young age you were taught to trust that life would support you and as you say in the book your mother used to tell you, “Don’t go into the world wanting. Go thinking about what you can give. And you will get what you want, because you won’t be going in as a beggar or a miser or starting from a position of lack.” How has this affected you?

Agapi: There’s a great relief to set your mind in the course of thinking, “what can I contribute to life?” Because it starts activating your offering and participating in a way that makes you feel good about yourself.  I’ve learned that bringing my full energy to something can be a contribution.  It’s the ultimate notion of giving of yourself and we all have it.

Jill: Not everything you have brought energy too has worked out as planned, however. For instance, I know that you came to the United States as a RADA trained actress to pursue a movie career and that you spent years working to fulfill that dream. I’m interested in the lessons you learned when that didn’t pan out as you had expected. A lot of people that I meet here in my clinic have hit a wall and are paralyzed by disappointment so I think it would help them to hear how you managed to continue to pursue your dreams whilst taking into account your reality.

Agapi: In chapter 8 called St. Joan on the bus I describe the epiphany that I had after years of struggling to get the parts and not getting them and how sharing my monologue with one passenger made me realize that I was waiting for someone to say, “Lights, camera, action, Ms. Agapi, we’re waiting for your close up.”  But, no one was saying that. I had to cast myself as the leading role in my own story and choose my own supporting cast and give myself a wide shot.  It was a turning point in my life.  What I would say to all those people you mention Jill is, if something hasn’t worked with relationships, career, find the Yes in you and start connecting with your spark no matter what it is.  What makes you feel alive?  Don’t ever lose your aliveness because something didn’t work out.  Because a man didn’t marry you, because a project didn’t work out, now matter what-  don’t lose your spark.  Find people who believe you.  If you’re hitting a wall, put yourself in reverse and look to see the window of opportunity if you shift your perception from how you think things should have been.  So often, the things that go “wrong” in our lives are the things that lead us to the things that go “right.”

Jill: Thank you for that, Agapi. I’m hoping that many people in our Yinova community will be inspired by your experiences and use your stories to find peace and inspiration when they “hit a wall” in their own lives. Your book starts in Greece, in Athens and ends, like Odysseus’s journey, on the Greek island of Ithaca. By coincidence, Ithaca plays an important role in my life and Greek culture has had a huge influence on me. I’m English and you talk a little in the book about the culture shock of moving from Athens to London. I feel as if spending time in Greece and living in America has helped me shake off some of my British reserve and open up my heart so I wonder if you would mind sharing what being Greek means to you and how it informs who you are. 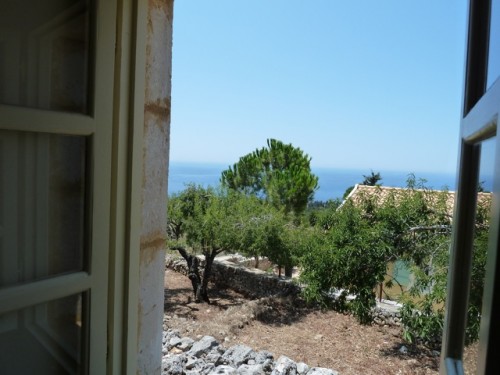 Agapi: I love being Greek.  I love the language.  I love the culture and I love feta cheese and kalamata olives. I love the way people touch, hug and are physical with each other. I remember so many times when I call my Greek friends and the way they express the Greek language, they immediately bond with you through their warmth and that’s always with me.  I think it’s also the sunshine and the climate that makes the Greeks so warm.  I strive to bring that to my life here and to everybody that I meet.  I love when I am in New York and I run into a Greek taxi driver and the next thing we are chatting in Greek and when we arrive at the destination and I ask how much it is and he says, “nothing for you my beautiful girl.”

As you know, I wrote two books about the Gods and Goddesses and I did a documentary on the Greek temples which ended in Ithaka.  There is something about the soul of Greece that meets you in the islands, in the sunsets, in the horizon of the Aegean and in the whole temperament that completely resonates in my soul and I think it resonates with everyone.  People say to me over and over again, “I fell in love with Greece and the Greek people. “  The Greek philosopher Thales said, “I think we’re all Greek” and I think that’s true.

On behalf of all of us here at the Yinova Center, I’d like to thank you, Agapi. Not just for spending time with us but also for writing such an inspiring book. Unbinding the Heart

touched me so much that I bought a copy for my 21-year-old daughter, hoping that she would be encouraged by your stories to keep her heart open and to live “full on” through life’s inevitable ups and downs.

You can read more about Agapi’s book on her website.

Why you should Never Argue with a Dead Person