We’re enjoying beautiful crisp autumn weather in upstate New York this weekend.  The sky is clear and blue, the sun is shining but there’s a slight chill in the air which makes me think of cooking nourishing food after a long walk with the dog. Our vegetable garden has lost most of its summer abundance but we do still have some hardy root vegetables to feast on. So yesterday after a hike in the woods to marvel at the spectacular autumn foliage, I raided the garden for some vegetables to roast.

The movement of autumn in Chinese philosophy is downward and the vegetables that grow at this time of year reflect this. Unlike summer vegetables that get their energy by soaking up the sun’s rays, autumn and winter vegetables reach down into the ground to get their sustenance and we in turn are nourished and sustained when we eat them.

This recipe would work with any root vegetables you have on hand. I had carrots, turnips, new potatoes, yams, parsnips, red onions, and beets. I sometimes roast the beets in a separate pan so that their juices don’t bleed onto the other vegetables which make the finished dish look prettier.

This recipe couldn’t be simpler. Throw all the vegetables (along with some thyme and rosemary) in a large baking dish. Season well with salt and black pepper, drizzle generously with olive oil and toss them with your hands to coat them evenly. Put the baking dish in the preheated oven at 400F and roast, stirring the vegetables occasionally, until they are tender and golden brown, about 1 hour. Transfer to a serving dish, adjust the seasoning, sprinkle with chopped parsley, and serve. 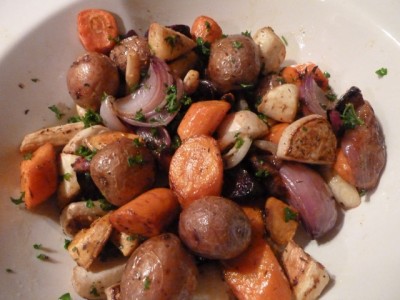 What Does Your Acupuncturist Eat? A Look Inside Laurel's Refrigerator

What is a "Perfect" Diet, Anyway?