Growing a Vegetable Garden from Seed

Growing your own vegetables is easier than people think. You don’t need a special green thumb or lots of experience and although it takes a small amount of effort you will be amply rewarded by lots of cheap, organic, and nutritious produce throughout the summer and into the autumn.

Noah and I started out as urban gardeners who grew our vegetables in a variety of mismatched pots and hanging baskets. Looking back it was amazing just how many vegetables we were able to grow in such a small space and in this recent blog Noah talks about how to garden if you live in a city without much outdoor space. Since moving to the country our garden has expanded and now almost all the vegetables we eat are homegrown. We even grow enough to freeze and preserve for the winter.

This year we decided to save money and become more self-sufficient by growing most of our vegetable plants from seed. It wasn’t difficult to do and meant that we had a much greater choice of which varieties to plant. We poured over seed catalogs and chose some interesting vegetables. There was a small outlay for some specialized equipment to make the process simple but the cost of this was offset by the seeds themselves. A packet of seeds costs about a dollar and will feed a family for months. As you can see from the picture below we also ended up turning over part of our living room to seed growing for a few weeks but looking out for new shoots was entertaining and part of the fun. 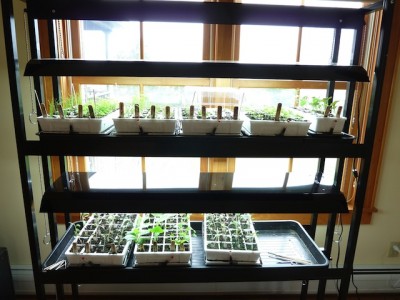 You can plant vegetable seeds indoors or outdoors and if you’re serious about growing vegetables from seed you’ll probably end up doing both. Some plants really benefit from getting a head start indoors and can tolerate being transplanted later on. These include broccoli, brussels sprouts, cabbage, cauliflower, tomatoes, eggplants, peppers, and a variety of herbs. Some plants such as carrots and beets really don’t like to be moved and these benefit from being sown directly into your garden. Check the seed packet to find out more about when and how to plant each type of seed.

There are a number of ways to grow seeds indoors and many websites that will give you great information but here’s what we used. 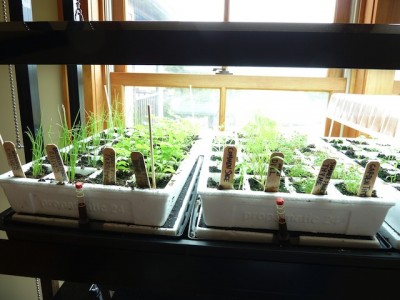 Very soon you’ll have trays of lovely seedling like the ones above. When the plants have developed about 4 separate leaves it’s time to thin them out and at this point, you can transplant them into pots. The final step is to “harden off’ the plant by acclimatizing it to the outside world. You do this by moving them to a sheltered area outside for a few hours each day and bringing them in at night. After 2 -3 days you can move them into the sunlight for part of the day but still, bring them indoors at night.

After that, they are ready to go into your garden and grow into hardy vegetables.

What Does Your Acupuncturist Eat? A Look Inside Laura's Refrigerator