Gung Hay Fat Choy! Welcome to the year of the yin water snake: 4711

It’s the Lunar New Year, and in Chinese medicine we tip our hats to the traditions of New Years past. Though we may not put on party hats, drink champagne or find a way to fit “4711”onto a pair of glitter-smattered glasses, there is still cause to celebrate as this new year brings transition and promise.

Fear of slithering reptiles aside, from now until January 30, 2014 we are living in the year of the water snake. What does this mean? Well, in Chinese medicine we talk a lot about the balance of the two elements yin and yang. Water is known to be more yin than yang as it’s cooling and soothing. We can expect this year to be nourishing in that cooling and calming way. The snake itself is a cunning creature, and yes, elicits initial fear in some who encounter it. But that doesn’t mean this is a new year fraught with fright. Snakes in Chinese mythology are thought of as little dragons; artful, cunning and crafty creatures. Snakes are passionate creatures, flexible and strong. They use their intelligence to navigate through difficult situations. In the past year, we have dealt with epic storms: Hurricane Sandy, winter storms, and power outages. The next year may bring more of the same, but in a snake year, we have the resilience and fortitude to persevere through it.

Speaking of creatures we may be afraid of, there’s a reason we wear red with the commemoration of a new year. According to mythology, Nian, a sea beast who likes to hide in the mountains 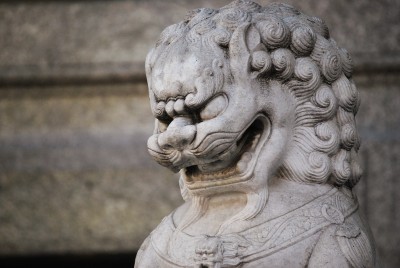 (and frankly kids, not a looker) comes out around the new year to prey on villages filled with helpless people. And we can all agree anyone would be helpless when looking at this guy.

Even though Nian is hideous, frightening and threatening, it also harbors fears of it’s own. Until Nian seeks therapy to overcome it’s fears, the color red scares the beast into hiding and keeps it away from attacking us. Red is a vibrant color for the new year, so we carry this tradition on and stave off Nian with a bold fashion choice. This also explains the rambunctious and loud but fun Chinese new year parades and events. You can scare Nian off yourself by donning a red coat and hat and heading to some of New York’s celebrations.

And what holiday would be complete without a variety of eclectic foods to ring in the fun? Jill has offered us a recipe for almond cookies in New Years’ past. Almond cookies represent coins, and coins represent wealth and prosperity. Offering cookies to friends and loved ones shows we wish them prosperity. And really, who doesn’t love a friend who offers cookies? It’s good karma all around. Gothamist also offers us a brief rundown of traditional Chinese foods to eat while ringing in the Lunar New Year.

Among the wearing of crimson and feasting on fish, lion’s head meatballs and other treats, we wish you a happy, healthy and productive year of the snake. 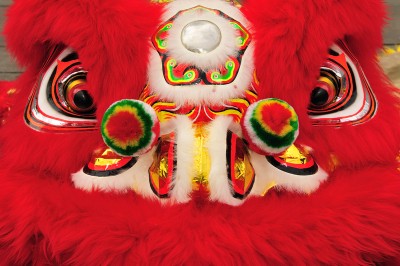