Buzz In Your Ear

Since the 1980s, ear acupuncture (also known as auriculotherapy) has been widely used in addition to whole-body acupuncture treatments. Ear acupuncture is particularly great at treating many types of addictions – for everything from drugs to smoking, eating disorders & gambling. But the power of ear acupuncture goes far beyond just treating behavioral problems.

Within the ear, there are dozens of acupuncture points that represent specific organ systems and functions of the body. This creates a microsystem that reflects our health and that can be used for treatment; ear acupuncture can be an addition to whole-body acupuncture or as a treatment on its own.

While auriculotherapy is typically associated with the 3,500-year-old practice of Traditional Chinese Medicine, its actual origins might surprise you. In the 1950s, a French neurologist named Paul Nogier witnessed a colleague treating their patient’s chronic low back pain by cauterizing a sensitive area on their ear. This sparked Nogier’s interest so much so that he then developed a microsystem that depicted a neurological representation of the entire body as it relates to brain function, also known as a homunculus. When he presented his model in 1957, the Chinese acupuncture community both embraced and expanded on it. Today there are a variety of auriculotherapy systems that have grown out of Nogier’s original work, but the one developed through Chinese medicine is the most common. Looking at the ear, the distribution of points roughly corresponds to the image of an inverted person. Points for the head, neck, and sensory organs near the bottom, rising up along the ear to the back and limbs with organs in the center. 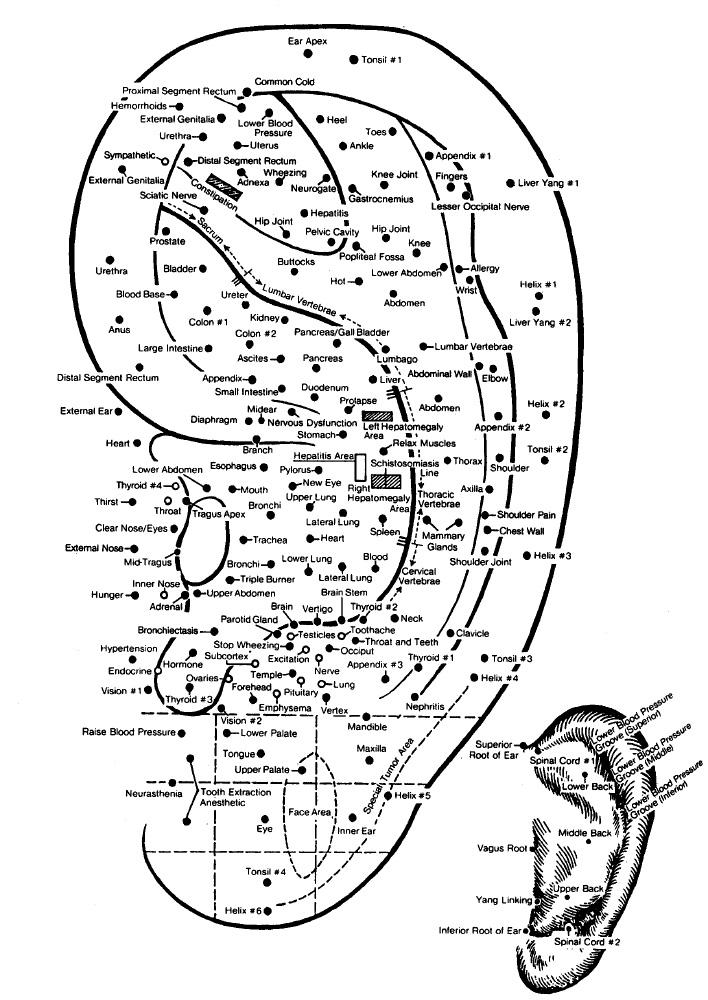 One of the benefits of ear acupuncture is its ease of application. It can be provided while the patient is seated, and there is no need to take off any clothing. This quickly became an attractive option for many people. It’s also an effective way to treat symptoms like chronic pain, without the use of needles, to the area that hurts.

While ear acupuncture can be used as a stand-alone treatment, it is often added to full-body acupuncture sessions as a way of reinforcing the therapy. One technique involves the application of ear seeds, which are small but powerful tools. They don’t pierce the skin but instead rest on the surface. They are adhesive seeds that apply gentle pressure to specific acupressure points. These seeds are traditionally vacarria seeds (which resemble poppy seeds) and are on small bandages, or adhesive tape, that hold them in place. Leaving those seeds on for a few days allows the benefits of acupuncture to continue after the patient leaves the NYC clinic. They are barely noticeable and don’t get in the way of normal activities – all you have to do is apply a small amount of pressure in a circular motion a few times a day to the seed to reap the benefits.  Your practitioner will determine the best points for you.

The spectrum of conditions treated with ear acupuncture is broad. Many studies have shown it is an effective treatment for weight loss, PTSD, menstrual pain, headaches, insomnia, anxiety, and stress, and many other conditions. Ear acupuncture has even been used in the wake of disasters. For example, when 9/11 happened, St. Vincent’s Hospital offered ear acupuncture in order to “reduce insomnia and offer stress relief to medical staff, city residents and emergency personnel.”

Recently, ear acupuncture has drawn the attention of the United States Air Force. Under the direction of Dr. Richard Niemtzow “Battlefield Acupuncture” has emerged as a safe and extremely effective alternative to narcotic pain management. It works without side effects, and without compromising a service-members ability to function in the field.

One great thing about ear acupuncture is that it is easy to learn. People who aren’t fully licensed acupuncturists can still be trained in auriculotherapy and then go on to offer it in environments where it might not otherwise be available. Another upside is that because it can be done seated, many patients can be treated in a relatively small space. In 1995 I had the pleasure of working at the ear acupuncture clinic at Lincoln Hospital in The Bronx. There, a program was developed that came to be known as the NADA (National Acupuncture Detoxification Association) protocol and it was provided in one large room with 55 chairs. It was an inspiring place to be. As soon as the doors opened at 7:30 a.m. the place would fill up, every single day. Lincoln trainees included workers in prisons, halfway houses, shelters, and rehabilitation facilities. After learning the protocol they were able to offer it at work to groups who tangibly benefitted from the treatments. This addition to treatment was so effective that the Lincoln program went on to be duplicated across the country.

Ear acupuncture may seem like an obscure sideline of Chinese medicine, but when celebrities like Penelope Cruz start showing off their new ear bling, you know its popularity is on the rise. Watch as Jill talks to Good Morning America about Penelope’s ear seeds!

Ear Seeds enable you to bring your acupuncture treatment with you on the go. Yinova’s ear seed kits include both crystal and gold Ear Seeds, which not only look pretty but can also enhance health and wellness when placed at specific points in the ear. Our kits come with information and diagrams so you can be sure you’re placing them on the correct points. You can use tweezers or your fingers and apply them to your own ear at home.

What To Do After Your Acupuncture Treatment